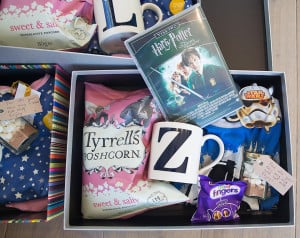 This year was the first of my new tradition – Christmas Eve Boxes! I saw a post on facebook about a little box for kids to open on Christmas Eve and I thought it would fit quite nicely with my children’s Norwegian heritage (they open ALL presents on Xmas eve there). I had a lot of fun getting the bits and pieces together, here’s what they got…. 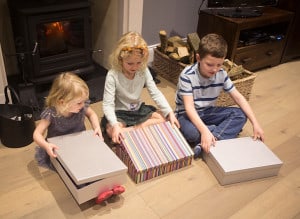 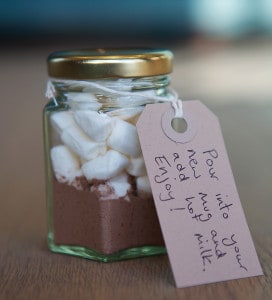 A pretty box (Paperchase)
A mug with their initial on it (M&S)
A jar filled with hot chocolate and marshmallows (three jars from hobby craft, Cadbury’s hot chocolate and mini marshmallows from Waitrose)
A snack – mini choclate fingers
New pyjamas (John Lewis) M & L had glow in the dark ones and Z got star wars
A couple of movies to pick from – I chose Harry Potter as Z has just started reading them & Shaun the sheep – they went for Harry Potter
Bags of popcorn 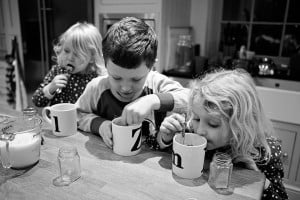 They loved it!  First they got into their new pyjamas, made the hot chocolate in their mugs and then they sat down to watch Harry potter with their snacks and popcorn and we joined them.  It was massive hit and a lovely thing to do to wind down on Xmas eve, as let’s face it, they’re pretty much bouncing off the walls in anticipation and it stopped the ‘please can we just open ONE?????’ for a little while. 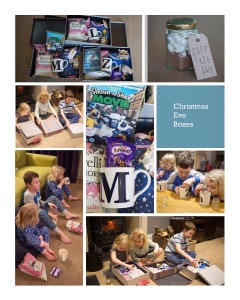 Oh and an extra bonus – I’d told my husband about the boxes and after the kids got them, I got surprised with my own box from the kids and hubby with a cookery book, bath bombs, a couple of magazines and a santa hat – hopefully they’ll keep up that tradition too! 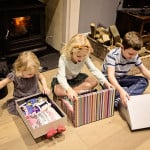